Many of the opinions expressed in the Open Licensing debate state there is a lot of ambiguity in the community about what actually constitutes fair use. A research project could be arranged that tests the public's notion of fair use. The project could be expanded to compare the outcome to those of copyright holders with the aim of discovering whether there is harmony between the opinions of the two groups.
Research setting - A series of remix videos from places like YouTube could be shown to people to see whether or not they think that copyright has been breached or if they think money should be paid. It would be important to have a spectrum of videos that show obvious breaches to some quite ridiculous ones (such as the one with the baby that Lessig shows). Some of the videos would have to be ones that copyright holders have demanded be taken down. The research could be conducted online with a series of videos with accompanying questionnaire.
Participants - A range of ages and nationalities would be preferred for further analysis.
Data collection - data would be collected via an online survey tool.
Analysis methodology - a minor statistical analysis would be done on the responses showing range, mean and median of positive and negative responses. Some further analysis could be done to show different opinions across age groups and nationalities.
Posted by Allan Quartly at 11:15 PM No comments:

The following are three peer reviewed articles and five other resources. These materials cover the Open License topic in the Introduction to Open Education course and are meant to help earn the OpenEd Researcher Badge.
Peer reviewed articles
1. Lichtman, D. (2009). Copyright as Innovation Policy: Google Book Search from a Law and Economics Perspective. Innovation Policy and the Economy, 9(1), 55-77.
Retrieved from http://www.jstor.org/stable/10.1086/592421?origin=JSTOR-pdf
Douglas Lichtman provides an analysis of the Google Book Search litigation case and uses it as a lens to study how copyright policy tries to "protect the incentives copyright has long served to provide authors and at the same time facilitate the continued emergence of innovative Internet services and equipment." Google's Book Search project allows users to search the books of the world and then view scanned images of the front and back covers and a number of inside pages. The Authors Guild and the American Association of Publishers are suing Google for copyright infringement arguing that Google has not asked for permission. Google's argument in return is that it would be too costly, or impossible in cases such as orphaned works, and as such would infringe upon their right to innovate.
Lichtman believes, "the result of the case will ultimately turn on the court’s interpretation of section 107 of the Copyright Act" which allows the court to allow copyright infringement if a “rigid application of the copyright statute … would stifle the very creativity which that law is designed to foster.” He then goes on to apply the four factors that courts are required to consider in fair use cases:
Before concluding Lichtman considers two other fair use considerations - the argument that Google Book Search benefits authors and the promise Google has made to allow authors and publishers to opt out of the project.
In conclusing Lichtman believes the courts will be able to strike a balance between the protection of the copyright holders without imposing such high a cost on Google that it discourages future innovation.
2. Dreier, T. (2010). Limitations: The Centrepiece of Copyright in Distress. Journal of Intellectual Property, Information Technology and E-Commerce Law, 1(2), 50-54. Retrieved from https://www.jipitec.eu/issues/jipitec-1-2-2010/2604/JIPITEC%202%20-%20Dreier-Limitations.pdf
In this article Thomas Dreier suggests that the history of copyright law in Europe has been about strengthening and extending the exclusive rights that copyright holders can apply to their work. He also suggests that this has been in response to the way technology has made it easy for "unauthorised copying and distributing of copyrighted works." Dreier then goes on to further suggest that limitations to these exclusive rights, such as fair use, are seen by copyright holders as a necessary evil that they have to abide by, as a "tribute" to the public.
While Dreier believes that historically "limitations and exceptions have become the main instrument in order to de-termine the exact scope of copyright," he also believes there are serious doubts this method has produced the outcome intended. He mentions attempts that have been made to remedy the situation: The Three Step Test, and The Draft European Copyright Code. He then notes that the International Conference on Commons, Users, Service Providers – Internet (Self-)Regulation and Copyright "explored both the status quo and the legal possibilities for shaping the limitations and exceptions in a way that they contribute to a balanced and well-limited copyright system ..."
3. Shapiro, C. (2007). Patent Reform: Aligning Reward and Contribution. Innovation Policy and the Economy, 8, 111-156. Retrieved from http://www.jstor.org/stable/25056200?origin=JSTOR-pdf
Carl Shapiro believes the "U.S.patent system allows patent holders to capture private rewards that exceed their social contributions." Consequently, he analyses two reform proposals, as well as studying three further reforms, in the hope of finding a way to rebalance the system. His analysis mostly looks at the issue from an economic perspective.
Five further resources
1. Helft, M. (2011). Judge Rejects Google's Deal to Digitize Books. The New York Times. Retrieved from http://www.nytimes.com/2011/03/23/technology/23google.html?_r=2&scp=1&sq=federal%20judge%20rejects%20google%27s%20negotiated%20deal%20to%20digitize%20books&st=cse
In the above New York Times article James Grimmelmann believes Google Books as opt-in will not solve the problem of orphaned books, while Pamela Samuelson believes that the issue of orphaned works should be solved by legislation.
2. Robinson, Z. (2011, October 31). Fair use, fair dealing [Video file]. Video posted to http://www.youtube.com/watch?v=vAZVgK8TcjM
Zoe Robinson looks at the issue of fair use when using movie trailers in a blog when reviewing a movie. She emphasises the point that where it may be considered fair use to show parts of a movie trailer to help with reviewing a movie, it may not be considered fair use to use all of the trailer in a review.
3. Korn, N. (2011, January 28). What is fair dealing? [Video file]. Video posted to http://www.youtube.com/watch?v=KZdnMTHhWbo
Naomi Korn in her video highlights the disconnect between the what the law says you can do and what technology allows you to do. The point she is making is that the law is not keping pace with technological change.
4. Lessig, L. (2009, March 12). Do Copyright Laws Stifle Creativity? [Video file]. Video posted to http://www.youtube.com/watch?v=JXwB9FlkNXA
In this video Lessig shows and comments on a number of examples of how the copyright system is being abused and stifling creativity.
5. Unknown author. (2009, May 1). Episode 33 - Public Goods [Video file]. Video posted to http://www.youtube.com/watch?v=D-Fi1SAEKS4
Understanding the issue of copyright and exclusive rights seems to need an understanding of public goods. This video explains public goods quite well.
Posted by Allan Quartly at 12:50 AM 1 comment:

One of the prevailing moral opinions today seems to be that the illegal copying of intellectual property is rampant and if it isn't stopped then all creative endeavours will cease and as a consequence, society will be worse off. Very little voice is given to an opposing view. The Open Licensing topic for the Introduction to Open Education course being run by David Wiley covers a number of areas concerning copyright, mostly from the perspective that copyright laws have gone too far and are stifling creativity. This blog entry will summarise the resources supplied in the above topic, particularly the points debunking the assumption that stronger copyright laws are always better for creativity and society as a whole, an important topic that needs to be discussed openly, with arguments from all sides, before policy decisions are made to increase the monopolistic terms of current copyright holders. 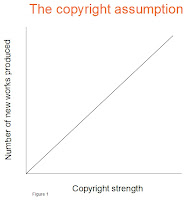 One of the tenets of copyright that the topic criticises is the assumption that the stronger the copyright laws and the longer they last, the greater the benefit to society as a whole. This argument assumes that Figure 1 on the left is a true representation of the premise that stronger copyright rules (term length, penalties, enforcement, etc) leads to a larger number of new works produced in a society and vice versa.

The counter argument to the above assumption looks something like Figure 2  which says that copyright laws encourage creativity up to a certain point. Beyond this point, further strengthening of copyright has the reverse effect, till it wipes out creativity completely. 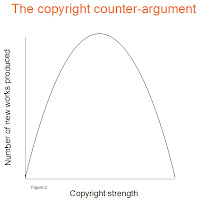 Lessig in his TEDxNYED video talks about the need for a balance between commercial interests and fair use. He uses a video by Julian Sanchez, who in turn uses a series of The Breakfast Club video remixes, to highlight the way that earlier works are used by people as a platform to express things. Lessig and Sanchez are suggesting that too tight a control over copyright would limit the ability of people to produce these types of work, thus lowering the number of new works created. Aoki, Boyle, and Jenkins, (2006) emphasise this same point in their comic Bound by Law by looking at cases where significant pieces of documentary footage have had to be removed, or projects abandoned altogether, for fear of litigation over copyright.

Lessig (2011) also points out in Against Perpetual Copyright that copyright is not a morally just concept in its own right but a monopoly bestowed upon creators of original works in order to "promote the progress of Science and the Useful Arts." Copyright is a means to an end, not an end in itself. The moment copyright stops promoting the progress of science and art then it loses its usefulness and validity. So if, in fact, Figure 2 is correct and Figure 1 incorrect, there comes a point in time where copyright laws should be weakened, not strengthened. Lessig suggests in all his arguments that we have gone beyond this point.

The question that Lessig doesn't answer is, "How long should copyright be permitted?" Rufus Pollock (2007) does answer this question is his paper Forever minus a day? Some theory and empirics of optimal copyright. According to his economic analysis the optimal period of copyright is 15 - 30 years. Pollock believes this duration strikes the optimal balance between the commercial interests of the copyright holder and society's need to continuously create new expressions of ideas.

Underlying all of the above is the belief that all creative works are built upon the creative works of others. Shakespeare is repeatedly used as an example of a work being used as a platform for others to express themselves. Lessig (2011) highlights how difficult it would be for modern interpreters of Shakespeare to track down the author's heirs if perpetual copyright existed back in the sixteenth century. Ironically, one of the strong proponents of strengthened copyright rules, Disney (according to Lessig), exists because it was able to repackage old fairy tales that were in the public domain at the time. As Lessig succinctly puts it in the TEDx video, there is a call for stronger copyright laws "so no one could do to Disney what Disney did to the brothers Grimm."

In conclusion, the material supplied by the Open Licensing topic does seem to indicate that there is a case for limiting the duration of copyright and that this limitation, if struck at the right balance, can protect the current holders of copyrighted material while ensuring new creations. To do otherwise risks grinding all creative processes to a halt which not only stops future creations but also destroys the licensing value of current material.
Posted by Allan Quartly at 4:38 AM 1 comment: